Endocrine Disrupting Chemicals
and Your Fertility

Every woman knows the powerful impact hormones have on their body.

And every woman trying to conceive also knows how important hormones are for getting pregnant and delivering a healthy baby.

But what if your hormones are being silently disrupted without you even knowing?

In this part of the Environmental Toxins mini-series, we explore the topic of endocrine disruptors – sneaky chemicals found in your everyday household products among other things.

What Are Endocrine Disrupting Chemicals?

Endocrine-disrupting chemicals (EDCs) are chemicals (both natural and man-made) that can mimic or interfere with the hormones of your endocrine system.

And in case you didn’t know, your endocrine system is kind of a BIG deal…

The endocrine system is responsible for regulating numerous functions throughout the body, including your mood, metabolism, sleep, sexual function, and of course, your reproductive system.

Unfortunately, EDCs can unknowingly disturb the balance of your endocrine system. Three of the most important ways EDCs affect the body are by:

In fact, researchers have identified EDCs that mimic all of the major hormones important for fertility, including estrogen, progesterone, androgens, and thyroid hormones. Yikes!

Over time this can result in many adverse health outcomes (such as obesity and diabetes) as well as —  you guessed it —  reproductive outcomes.

As we’ve mentioned in prior posts, proper hormonal signaling and balance are critical to optimal reproductive function… when this is thrown out of balance by EDC’s you can imagine how that might be an issue.

There are way too many EDC’s out there to review all in one post, but three of the biggest players include bisphenol-A, phthalates, and polybrominated diethyl ethers (PBDEs).

Before we talk about these, let’s briefly take a look at how they get in the body in the first place…

How Do EDC’s Get Into the Body?

EDC’s are found in numerous everyday products we use.  Literally, they are everywhere…

Everything from industrial packaged foods to personal care products, cosmetics, toys, the lining of canned foods,  food storage containers, pesticides… even the dust in your home.

Accordingly, exposure can occur through a variety of mechanisms including transdermal absorption, inhalation, or ingestion.

Some EDCs have shorter half-lives, meaning they are quickly cleared from your system once you remove the source of exposure whereas others can persist for months.

And when it comes to EDCs, even small doses can matter.

EDC’s are considered an important public health concern that is being addressed by the National Institute of Environment Health Sciences.

So let’s dive in and explore the ones we think you should be keeping an eye on while trying to conceive (note, this is not an exhaustive list, but a good first starting point). 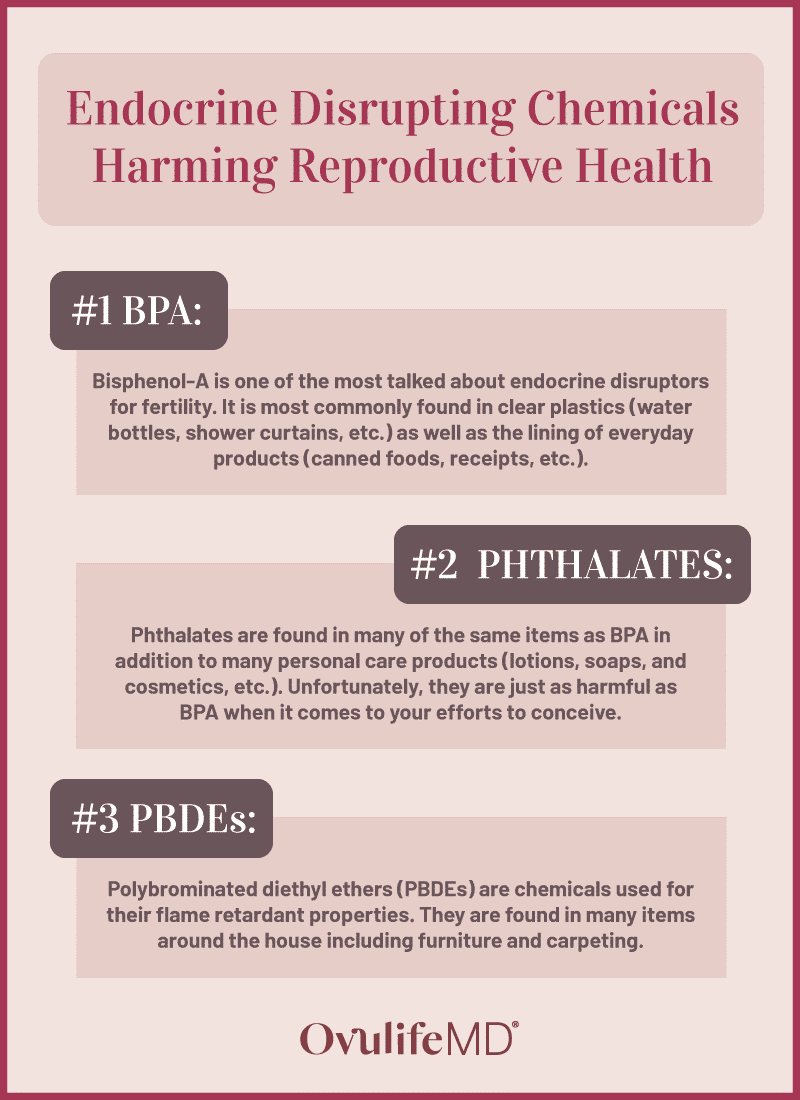 BPA is a chemical produced predominantly in the production of polycarbonate (hard, clear plastics) and epoxy resins (the lining you see on the inside of some metal-based canned foods and beverages). It’s been used in food and beverage packaging since the 1960’s.

BPA can be found on just about anything… canned foods, thermal receipts, drink and food containers, cell phones, baby bottles, and pacifiers. And your exposure can be through inhalation, ingestion, or absorption through your skin.

Not surprisingly, according to data from the National Health and Nutrition Examination Survey (NHANES), 93% of the U.S. population has detectable levels of BPA in their urine.

Why is BPA a problem for fertility?

When it comes to general fertility and reproductive outcomes, BPA has been shown to be associated with:

Among infertile women undergoing IVF, higher urinary BPA levels have been associated with:

Interestingly, researchers who conducted the EARTH study demonstrated that soy consumption may protect against the adverse effects of BPA. They noted that the decrease in implantation, clinical pregnancy, and live birth rates with increasing urinary BPA concentrations were unrelated among women who consumed soy.

Okay, besides eating soy (we know not everyone is down with soy), it seems like the easiest action would be to buy plastic products that are BPA free, right?

That’s what we used to think too… The problem is that some of the BPA alternatives, such as bisphenol S, are also harmful.

So how can you minimize your exposure? Live in a bubble? Thankfully, that’s not necessary.

These small changes, even if you just choose one or two, will add up over time. And the even better news is that BPA tends to be quickly cleared from your body, so your actions today can make a difference tomorrow!

Phthalates are synthetic plasticizers, or chemicals used to add flexibility and durability to plastics.

Phthalates are found in many of the same items as BPA. However, they tend to show up more in personal care products such as lotions, soaps, and cosmetics in addition to processed foods, plastic and recycled cardboard food packaging, medical tubing, and any material containing polyvinyl chloride (PVC).

One study also showed higher levels of phthalates in people who dined out as opposed to those who cook in– likely attributable to increased chemical exposure through food packaging, handling, and processing.

Not surprisingly, due to their ubiquitous nature, phthalate metabolites have been shown to be detectable in more than 95% of serum samples in the U.S. population.

Why are phthalates a problem for fertility?

Women with endometriosis have been shown to have significantly higher plasma concentrations of the phthalate metabolite di-(2-ethylhexyl-phthalate) (DEHP) compared to women without endometriosis.

For those of you unfamiliar with the topic, endometriosis is a painful disorder that is characterized by endometrial tissue outside of its normal location in the uterus and is seen in higher incidences in infertile populations.

When looking at infertile couples undergoing IVF and embryo transfer, the EARTH study team found that higher phthalate metabolite levels were associated with:

Men have not been shown to be immune to the toxic reproductive effects of phthalate exposure. A dose-response relationship has been shown between urinary phthalate metabolites and decreased sperm concentration and motility in male partners of subfertile couples.

Good news here! All of the strategies we discussed above to reduce BPA exposure will also decrease phthalate exposure!

A couple of additional steps you can take if you’re feeling extra inspired:

They can be used on upholstered furniture, carpeting and textiles, and some electronics. PBDEs can also be found in dust that’s brought in on our shoes and clothing from outside.

Unlike BPA and phthalates, PBDEs are lipophilic (fat-loving)… and can linger in adipose tissues for months to years. This means minimizing exposure is most beneficial in the long run.

Why are PBDEs a problem for fertility?

Data is limited when it comes to fertility outcomes and exposure to PBDEs.

Evidence has shown a higher rate of miscarriage in women with higher levels of PBDEs.

In terms of obstetric outcomes, evidence from China showed women with the highest levels of PBDE exposure to have a higher incidence of stillbirth, low birth weight, and preterm delivery.

In California, where furniture flammability standards are strictest, some of the highest levels found in pregnant women and were associated with thyroid function— a critical hormone for optimal reproductive function and fetal brain development. *Important note: this study was limited by a small number of women (25 total) but was substantiated by similar findings from Duke University.

After reading this, you might feel like you need to live in a bubble, but we promise you, that’s not the case.

Taking small steps every day to minimize your exposure to EDCs can make a BIG impact! We encourage you to choose one thing and make that change this week. Then next week, choose another.

Small changes over the long run will add up to something big – you’ve got this!

P.S. Don’t forget to check out our individual posts about each of the top 3 environmental toxins threatening your fertility.