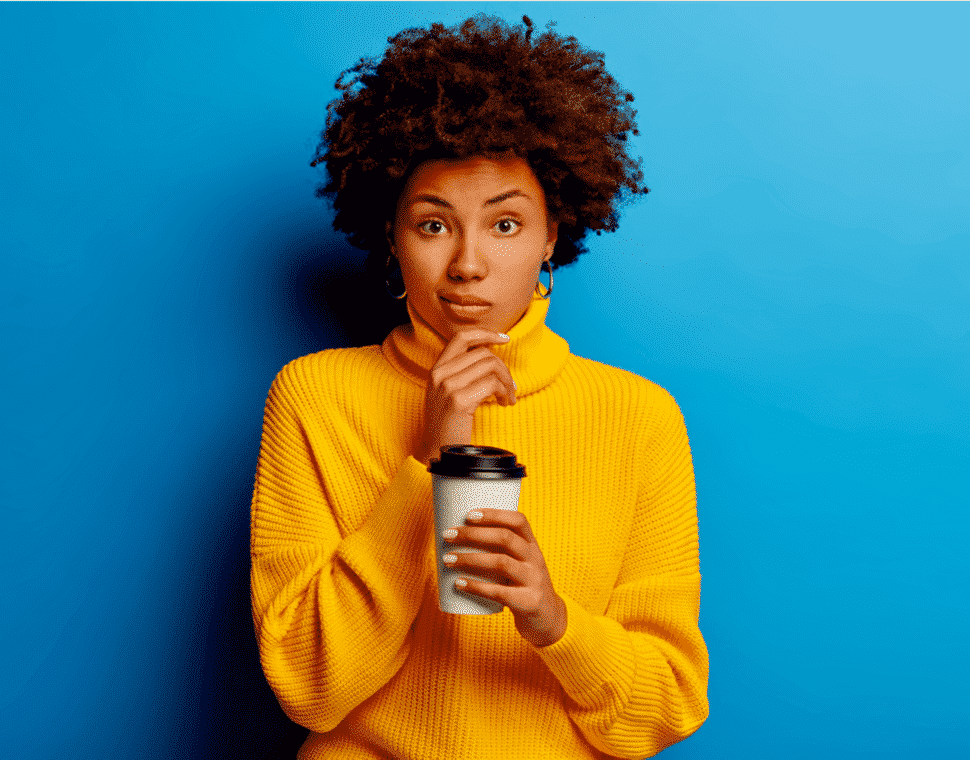 From coffee to tea to kombucha, caffeine is found in many popular drinks. And if you’re anything like us, it would be a huge sacrifice to give up that morning cup of Joe (#coffeeislife).

However, the important question is…

Do you actually need to cut the caffeine when trying to conceive?

Luckily, when we dug into the available data, you may be pleasantly surprised to learn that a few (small-sized) cups of coffee might not be as detrimental to your fertility as one would imagine.

But before you reach for your third cup of coffee, there are a few important things you should know about the effects of caffeine on your reproductive health.

Why Caffeine Causes Concern for Pregnancy

One of the biggest reasons the American College of Obstetrics and Gynecology suggests limiting caffeine intake to < 200 mg/day is the associated risk of higher levels of intake with an increased risk for miscarriage during pregnancy.

Data pulled together from over 25 studies suggests that caffeine consumption of 300 mg/day is associated with a 37% increased risk for spontaneous abortion.

And when this amount increases to 600 mg/day, the risk increases 2.5 fold compared with no intake at all. Clearly, there is a dose-response at play here.

When looking into the matter more closely, it appears that certain women may be more susceptible to the adverse effects of caffeine when it comes to maintaining a healthy pregnancy…

Based on the results of a case-control study (a study that compares 2 different groups to one another), it appears that women with a certain genetic polymorphism (CYP1A2) are more likely to experience recurrent pregnancy loss (RPL) than those without this gene mutation.

Aside from the potential risk of miscarriage, higher maternal caffeine intake during pregnancy has been associated with a higher risk of delivering low birth weight infants. This correlation was originally noted back in 2014 and then again in 2020 with a meta-analysis of 15 cohort studies.

Now for those of you wondering about caffeine before pregnancy (i.e., preconception), a study published in Lancet back in 1998 initially created a lot of negative buzz over caffeine’s impact on female fertility. In that study, women who consumed more than one cup of coffee per day were half as likely to conceive as those who drank less.

Of course, as you know, the results from one study should not lead us to a definitive conclusion. More on this in just a moment…

Bottom line: Caffeine can have a negative impact on your reproductive health once pregnant, but there’s more to consider surrounding its effect on your initial efforts to conceive.

What the Current Research Reveals

When reviewing the evidence surrounding caffeine and fertility, it’s helpful to break things down according to the impact on couples trying to get pregnant naturally versus couples undergoing fertility treatment.

In the same meta-analysis we referenced regarding spontaneous abortion (SAB) risk, researchers failed to find an association between caffeine consumption and fertility outcomes. Additionally, no clear connection was found between caffeine and time to pregnancy.

In a separate prospective study of over 7000 Danish women, neither the consumption of caffeine nor the relative amount consumed affected those who were diagnosed with primary infertility.

Similar findings were also noted in another prospective study published in Epidemiology when looking at over 18,000 women without a prior history of infertility. In this study, researchers noted that caffeine consumption “did not impair ovulation to the point of decreasing fertility.”

During the past decade, the use of assisted reproductive technologies (ART) has increased worldwide. Luckily for us, the research investigating modifiable lifestyle factors (such as caffeine intake) and ART outcomes among women facing infertility has grown too.

A recent review article summarized the impact of caffeine intake on reproductive outcomes from women undergoing ART.  Of the five epidemiologic studies that medically reviewed this topic, only one study found a negative effect of caffeine intake on live birth following ART. The other studies in the review failed to find any negative effects that caffeine places on fertility outcomes among women undergoing ART.

Additional data echoes the conclusion that moderate caffeine intake by women in the year prior to ART has not been associated with negative outcomes.

There is one study that’s somewhat interesting and stands out. When researchers looked at a group of 1,708 women undergoing various fertility treatments (IVF/ICSI/IUI), coffee consumption did not seem to affect the chance of achieving a clinical pregnancy or giving birth to a baby.

Surprisingly, women treated with IUI who consumed coffee on a daily basis were more likely to achieve a clinical pregnancy and live birth compared to coffee abstainers.

Important considerations about the research

Before you go off and change your caffeine consumption, it’s important to keep in mind that researching the impact of lifestyle choices is a little complicated.

Well, most of these studies are performed on data gathered from real-life situations. And as we know, real life is not black and white. Meaning, researchers could not control for everything women ate or drank or the accuracy of the information reported.

Never mind the fact that one person’s cup of coffee may look quite different from someone else’s and that the strength of the cup might vary as well.

Bottom line: The current evidence regarding caffeine intake and fertility outcomes may not be as alarming as it was initially thought. 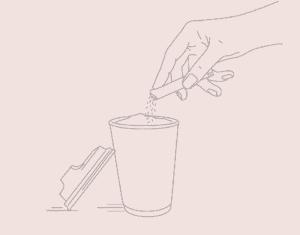 Although caffeine may not impact fertility outcomes as much as once thought, sugar-filled caffeinated beverages still pose a reason for concern.

Data suggests that a higher intake of sugary soda is associated with lower total, mature, and fertilized oocytes and top-quality embryos after ovarian stimulation.

Outcomes from one study found that when compared to women who those who abstained, those who consumed sugar-containing caffeinated beverages had on average:

In the end, the authors conclude that sugary beverages, independent of their caffeine content, maybe a bigger threat to reproductive success and the risk for infertility than caffeinated beverages without added sugar.

If you’re reluctant to switch your soft drinks to another caffeine source, here’s another potentially motivating fact for you… Researchers have found that women who drank ≥ 2 servings of tea per day were more likely to conceive than those who did not.

For those of you willing to cut the caffeine, you might be wondering to yourself…

“What about the man in this equation? Should he be cutting back on caffeine too?”

Well, caffeine and male fertility appear to have an even bigger question mark when it comes to getting pregnant.

Since coffee is often lumped into the category of other bad habits like cigarette smoking and recreational drug use, it’s often recommended that men simply abstain from caffeine intake when trying to conceive.

However, data suggests that this sort of recommendation is not as clear-cut as many would believe. Based on the results from a systematic review of 28 papers that included almost 20,000 men, here are some findings to consider:

The take-home message should be that blanket statements regarding caffeine and male fertility are not feasible at this time. Caffeine may play a role in some fertility parameters, but not all.

When it comes to caffeine consumption among men, what they should likely focus their attention on is reducing sugar-containing caffeinated beverages like soda or energy drinks. Similar to the data for women, caffeinated soda and energy drink intake is associated with reduced fecundability among males.

Total Consumption Beyond Your Coffee

When deciding whether or not to reduce your caffeine consumption, it’s first important to determine how much caffeine you’re actually consuming.

Just how much caffeine is in a standard cup of coffee?

How about that 12-ounce can of soda?

Here are some basic estimates regarding the caffeine content of various beverages: 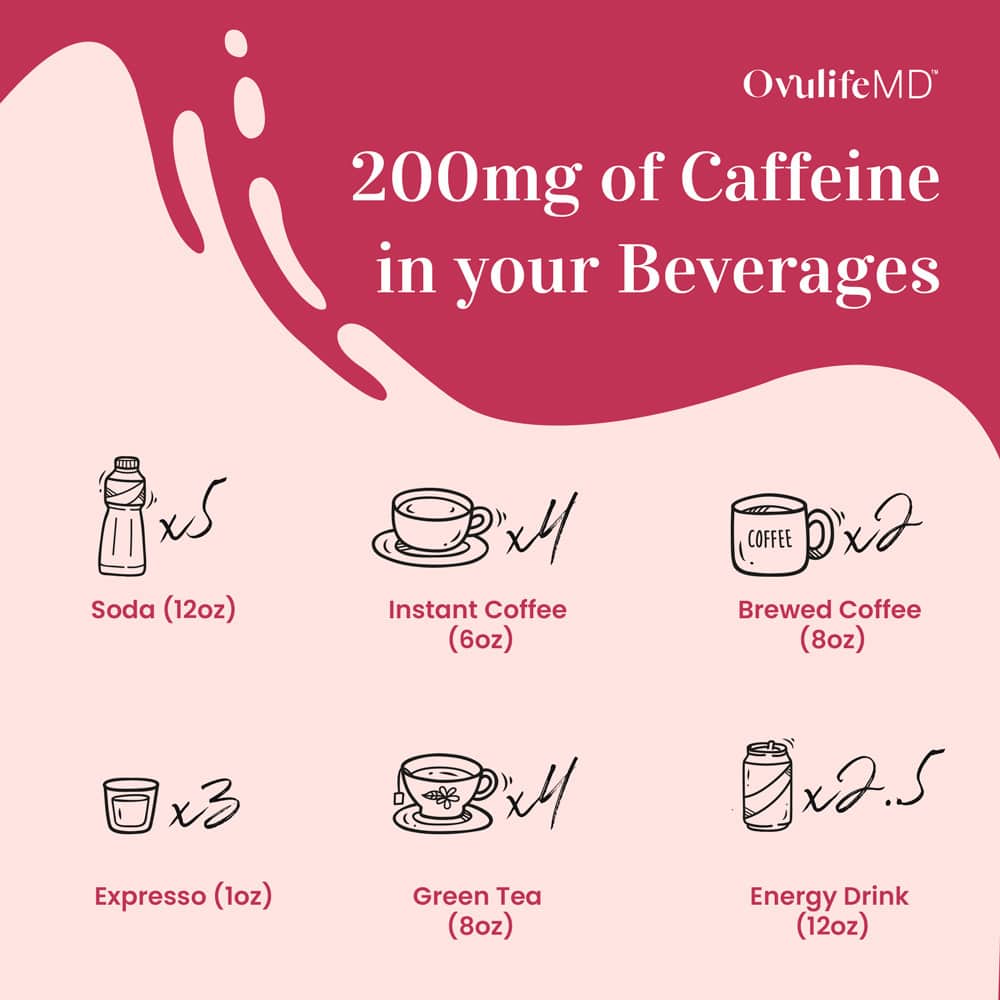 Make sure to take a close look at the caffeine content in your favorite beverages and tally up the total amount you’re getting throughout the day!

Regardless of all the buzz around the topic, caffeine intake – in the appropriate amount – does not appear to cause significant fertility problems when trying to conceive.

Hopefully, you picked up that the exception to caffeine consumption is sugary beverages – those should most definitely be avoided for optimal reproductive health. Otherwise, recommendations for caffeine intake should be made on a case-by-case basis.

Women at risk for miscarriage should definitely limit or avoid caffeine altogether. And once a confirmed pregnancy is established, follow expert guidelines and limit your intake to 200 mg of caffeine per day.

And if you simply can’t kick your full-strength latte habit, try a half-caffeinated cup of coffee or a cup of herbal tea. Testing out these options may satisfy your craving without loading your body up with the stimulant you may be wanting to limit.

Whenever you’re ready, we’re here to help you remove fertility-threatening foods from your diet so you too can increase your chances of getting pregnant.

JOIN US INSIDE THE FERTILITY FOODS CLEANSE TODAY 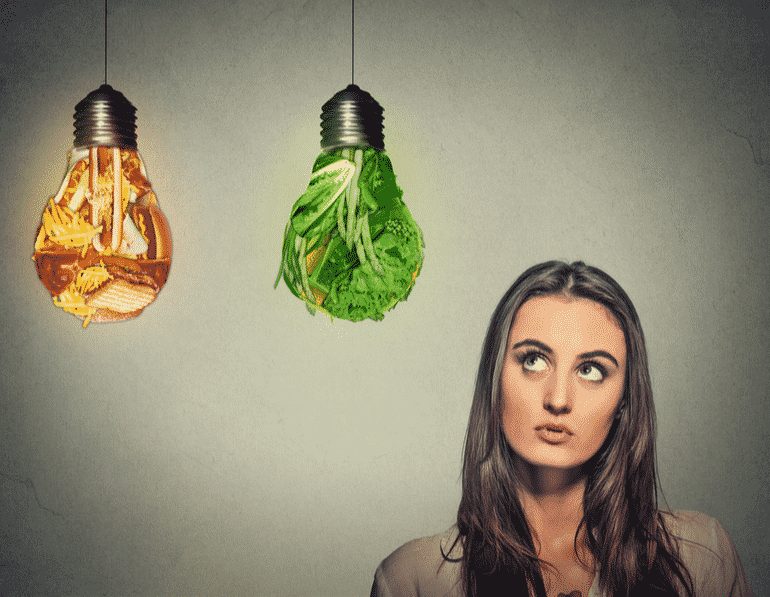 Dairy and Fertility:
Is There Really a Connection
Between Dairy and Infertility? 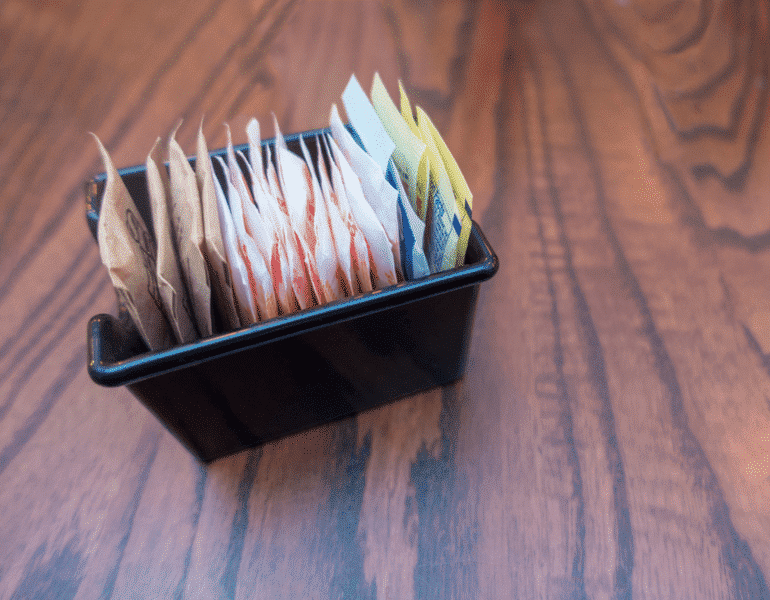