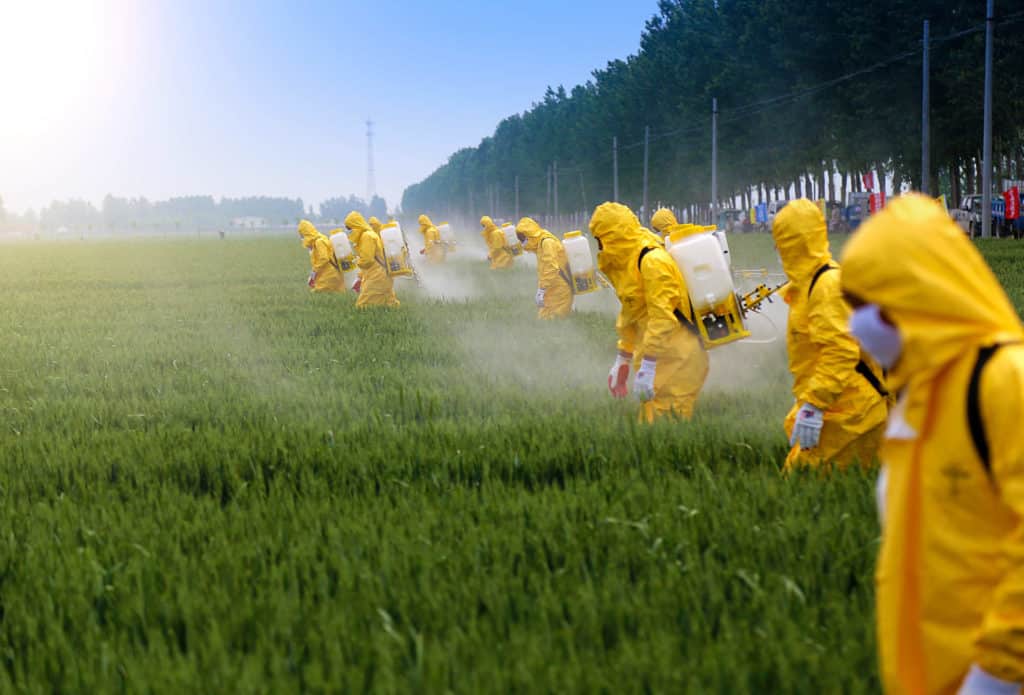 After reading the Decoding the Fertility Diet series, you know how important eating a whole-food, plant-based diet is for your fertility… which means LOTS of fruits and veggies!

But what about “eating organic?”

What does that even mean really? And does it actually matter for our fertility or reproductive success?

In some cases, YES!

In this part of the Environmental Toxins mini-series, we explore the topic of pesticides – and when it matters most to “go organic.”

Why Are Pesticides So Hard to Avoid?

Well, for starters, it’s estimated that over 1 billion pounds of pesticides are used in the United States each year and more than 90% of the US population has detectable levels of pesticides in their urine or blood. Frightening, we know…

And while pesticide exposure can occur through a variety of routes, the primary source is through the consumption of pesticide-laden fruits and vegetables.

Unfortunately, it has become increasingly recognized that the US lags behind other countries in limiting the use of harmful pesticides, so these findings may not necessarily be generalizable world-wide.

However, the food industry has long claimed pesticides to be harmless to humans at the low doses that we are exposed to in our diet. Unfortunately, studies continue to emerge suggesting that even low-dose pesticide exposure is harmful in many areas of our health, including our fertility. 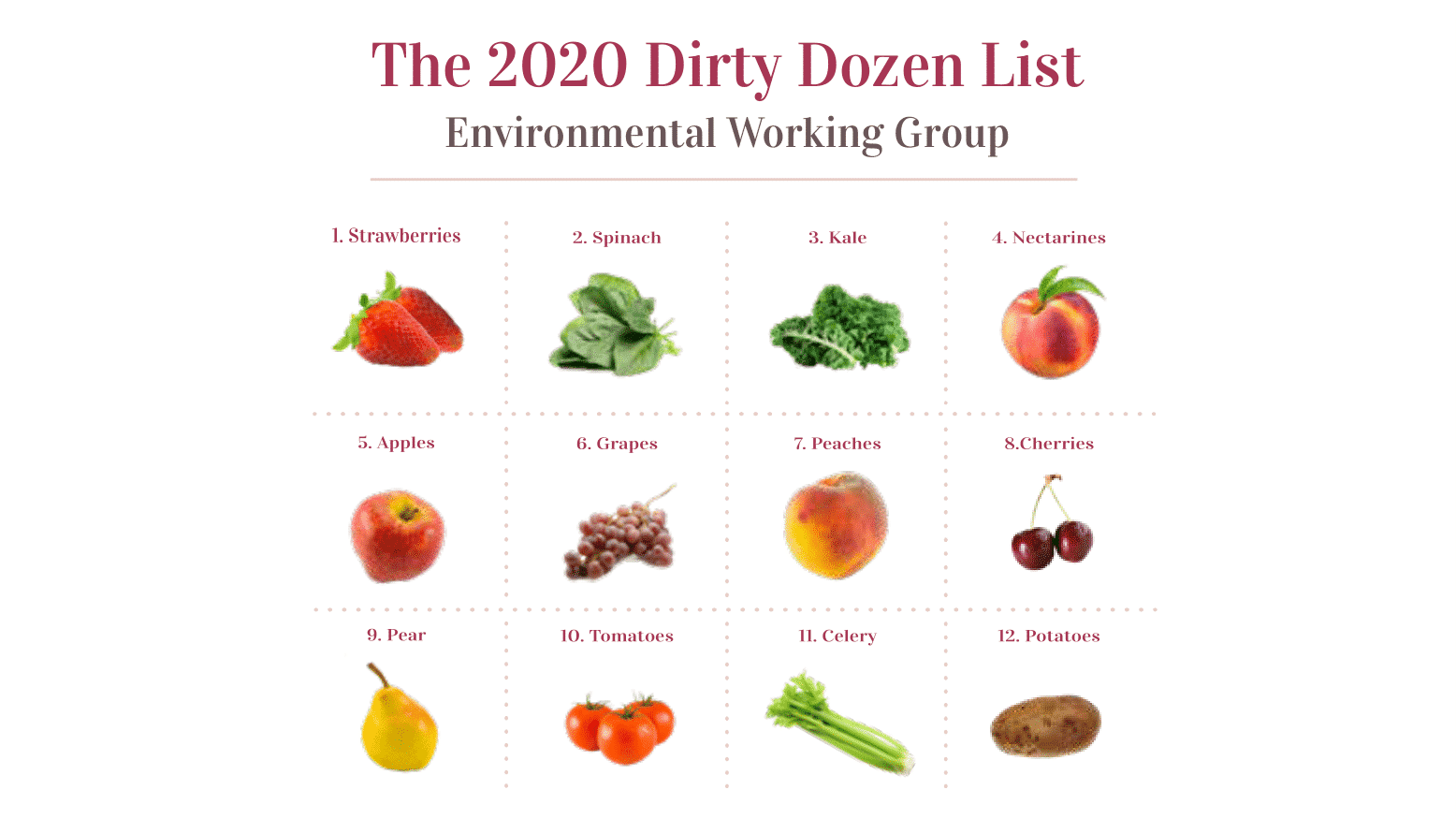 The Environmental Working Group puts out a list of the top 12 fruits and vegetables with the highest pesticide residue burden each year, affectionately known as “The Dirty Dozen.”

The top of the list again this year was one of my personal favorites… strawberries. Strawberries are closely followed by many others that we eat in our household on an almost daily basis including spinach, kale, and apples.

So does this mean we avoid eating these foods?

It simply means we’re more mindful of our organic options when it comes to these nutritious and delicious foods while continuing to wash all produce thoroughly.

What Does “Organic” Really Mean?

In the United States, organic can be defined differently depending on the product and labeling.

The U.S. Department of Agriculture (USDA) certifies whether or not food items are organic. For produce to be certified as USDA Organic, farmers have to stick to a specific set of government requirements.

If you want to know whether or not the fruits and vegetables you’re eating are really organic, look at the Price Look-Up (PLU) sticker. Organic produce will have a code that begins with the number 9, while nonorganic items will not. For example, the PLU code for large organic Granny Smith apples (Dr. Haas’s favorite) will be 94071, compared to 4071 for those grown with pesticides.

Slightly off-topic, but another tip when it comes to shopping – a PLU beginning with the number 8 indicated the item is genetically modified, but more on that later…

For produce or food products that come in a box (e.g., spinach) be on the lookout for the USDA’s official organic seal, which is green and white. Some manufacturers and producers use a very similar, though different colored, seal or use tricky phrases like “made with organic ingredients”.

Bottom line: Make sure to look for the USDA organic label of the number on the PLU sticker when making the decision to purchase organic.

Okay, moving onto the heart of the matter – reproductive outcomes…

Early studies have linked preconception exposure and elevated levels of pesticides to:

But what about early pregnancy and fertility outcomes? Do pesticides matter then?

Recent studies would suggest yes, in some cases.

The Environment and Reproductive Health (EARTH) study sought to examine the association of preconception intake in 325 women of pesticide residues on vegetables and fruits with infertility treatment outcomes following IVF.

… when compared to the lowest intake of pesticide residue containing produce (<1 serving/day).

We do have some good news though…

Further analysis of the EARTH study revealed that men who consumed more than 1.5 servings of high-pesticide-residue produce per day have fewer normal shaped sperm as well as a lower total sperm count.

More recently, the PRESTO study followed over 5000 women trying to conceive without a history of infertility and did not find an association between pesticide residue burden score intake and fecundability (the probability of conceiving per cycle).

So what does this mean?

As with all research, there are limitations to consider.

In both cases, researchers did not directly measure concentrations of pesticide metabolites in the body. Instead, they estimated pesticide consumption based on average levels of residues found on foods as recorded by the USDA. They also did not directly verify foods consumed by the participants and relied on self-reported food frequency questionnaires.

Lastly, data on whether produce was consumed as organic or conventional was not assessed in the EARTH study which could limit interpretation. And while the PRESTO study attempted to assess the proportion of organic produce consumed, it was missing over 75% of this data from study subjects, which limits interpretation.

To limit exposure without having to go completely organic, which can certainly get pricey, we recommend opting for organic when consuming foods from  The Dirty Dozen whenever possible.

If organic isn’t an option, be sure to wash your fruits and vegetables REALLY well to reduce exposure. Use a homemade wash to get them extra clean. Our favorite is a dilute solution of vinegar mixed with citrus peel.

If you’d rather not chance it, you can always purchase conventional produce predominantly from The Clean Fifteen list (the produce with the lowest pesticide residue burden scores). These tend to be the items with an extra or thicker layer of skin on them, like avocados, corn, pineapples, eggplant, onions, etc.

So there you have it!

Is it necessary to go completely organic while trying to conceive?

We don’t think so… But would you likely benefit from choosing organic when it comes to the dirty dozen? A resounding – ‘most likely’ (enough so that we religiously abide by this shopping principle).

When nourishing your body on your fertility journey, it’s important to keep in mind that eating a whole-foods, plant-based diet rich in fruits and vegetables (organic or not) will help support your overall reproductive efforts.

If struggling with fertility, or undergoing reproductive therapy treatments, you may benefit from going organic, especially when it comes to the dirty dozen.

Organic or not, WASH your fruits and vegetables thoroughly!

Whenever you’re ready, we’re here to help you remove fertility-threatening foods from your diet so you too can increase your chances of getting pregnant.

DISCOVER HOW TO RESET YOUR DIET FOR OPTIMAL FERTILITY