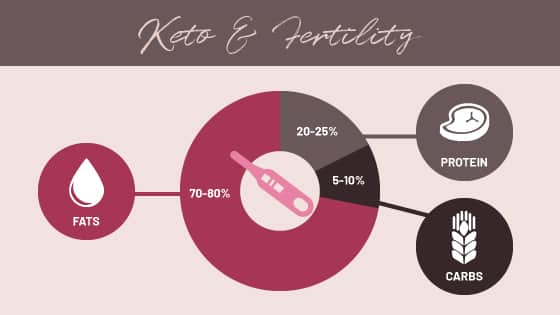 Amongst all of the diets a woman can try to help get pregnant, one of the most controversial is the ketogenic diet (aka, the keto diet).

And although social media and Dr. Google may suggest that the ketogenic diet will result in the fastest conception journey ever, the data suggests otherwise.

What is the keto diet?

When people refer to the ketogenic diet, they are typically referring to the standard keto diet.

Generally speaking, the standard keto diet is an eating pattern high in fat, moderate in protein, and low in carbohydrates. Most keto experts recommend a caloric intake closest to  75% fat, 20% protein, and 5% carbs.

The goal is to get your body in a state of ‘ketosis’, meaning your body starts using fat as fuel instead of glucose. Being in a state of ketosis can result in weight loss and reduced inflammation, two outcomes that can certainly be pro-fertility.

In theory, by just focusing on these two outcomes, the keto diet should be the magic bullet to baby-making and every woman who is trying to conceive should be following it to a tee, right?

Unfortunately, the data is not as strong as some make it out to be.

Despite its popularity, data surrounding the keto diet and fertility is extremely limited.

Theoretically speaking, a ketogenic diet could be beneficial for fertility just by virtue of its ability to assist with weight loss.

We know that weight loss of as little as 5-10 percent can be significant in improving hormonal imbalances and reducing rates of spontaneous abortions and miscarriages. And since weight loss goals appear to be easily achievable for many who follow the keto diet, it’s natural to assume that the keto diet is responsible for positive fertility outcomes.

After a quick google search, one would think that there should be some promising studies supporting keto and fertility.

Unfortunately, when searching PubMed with the phrase ‘ketogenic diet and fertility’, there are only 6 entries at the time of this writing. And to make things less clear, one of the strongest studies listed was a systematic review that looked at low-carbohydrate diets – most of which did not actually meet the carbohydrate cut off of a standard ketogenic diet.

With that said there are a few studies to date looking at the keto diet and polycystic ovarian syndrome (PCOS).

In an early pilot study from 2005, 5 out of 11 women who completed a 24-week ketogenic diet experienced significant reductions in body weight, percent free testosterone, LH/FSH ratio, and fasting insulin. Promising findings for sure!

Now fast forward fifteen years to another study looking at 14 women with PCOS. Similar to the pilot study, women who adhered to 12 weeks of a Mediterranean-based ketogenic diet experienced improvements in hormonal markers along with metabolic markers (insulin, glucose, lipids, etc.).

Although the results of the PCOS studies and keto are exciting, the medical community tends to shy away from making recommendations based on such a small number of studies, especially those with so few women participating.

Bottom line: Data is severely lacking when it comes to keto and fertility.

Potential shortcomings of the keto diet and fertility

Aside from the sparsity of scientific research around the topic of keto and fertility, there are a number of practical shortcomings worth considering. 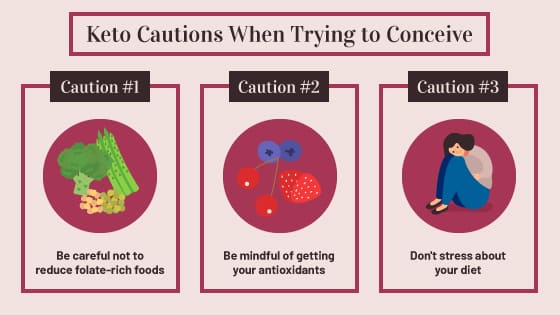 Shortcoming #1: The keto diet is extremely restrictive of folate-rich foods.

When people are eliminating carbs, they are eliminating fortified grains and large amounts of fruits and vegetables – groups of foods that are rich in nutrients like folic acid.

Women who are trying to conceive are told that their intake of folic acid and folate are important to reduce the risk of babies developing neural tube defects. In fact, in the United States, many carb-heavy foods are made with flour that is fortified with folic acid.

The keto diet restricts many of these fortified foods, and therefore women who are following a keto diet run the risk of not eating enough of this important nutrient.

This point is so important that data from the National Birth Defects Prevention Study was closely evaluated to assess the association between carbohydrate intake and neural tube defects.

The results of this study revealed that women who restricted carbohydrate intake were more likely to have an infant with neural tube defects. Although it’s not clear whether these women were all taking a prenatal vitamin, it is important to highlight that a greater risk of negative outcomes can occur when following a low carb diet.

Shortcoming #2: The keto diet is typically lower in antioxidants.

Antioxidants are found in many carb-rich foods that are limited or avoided when following the keto diet (like fruits).

It is suggested that oxidative stress is involved in the cause of some fertility challenges, and antioxidants are thought to reduce the damage caused by oxidative stress.

If you are trying to support your fertility, many experts recommend following a diet that is rich in foods like whole grains, fruits, and vegetables – foods that contain natural carbohydrates and natural antioxidants.

Following the keto diet does not allow for the consumption of many antioxidant-rich foods and therefore may not be as fertility-fueling as some would like to believe.

Shortcoming #3: The keto diet can create added stress on the body.

The keto diet can be restrictive for some people and cause additional stress to their bodies while trying to comply with the guidelines. Stress is not fertility-fueling by any account.

If following the keto diet acts as a source of stress for a woman (either physiologically or mentally), it may be counter-productive.

It may be tempting to give the keto diet a try while trying to conceive given its growing popularity.

But based on the current evidence available, it’s not one of the better nutritional strategies to get pregnant. Moreover, to our knowledge, there is minimal data evaluating the effects of following the keto diet during pregnancy, and we don’t suggest following if you become pregnant.

In the end, following a diet that is rich in antioxidants (think produce, nuts, and whole grains), managing stress, and eating low mercury fish or seafood 2 times a week are all evidence-based steps you can take to support your fertility goals. Check out the mini-series on Decoding the Fertility Diet if you need a refresher on the elements of a pro-fertility diet.