Soy and Fertility – Does Soy Really Cause Infertility? 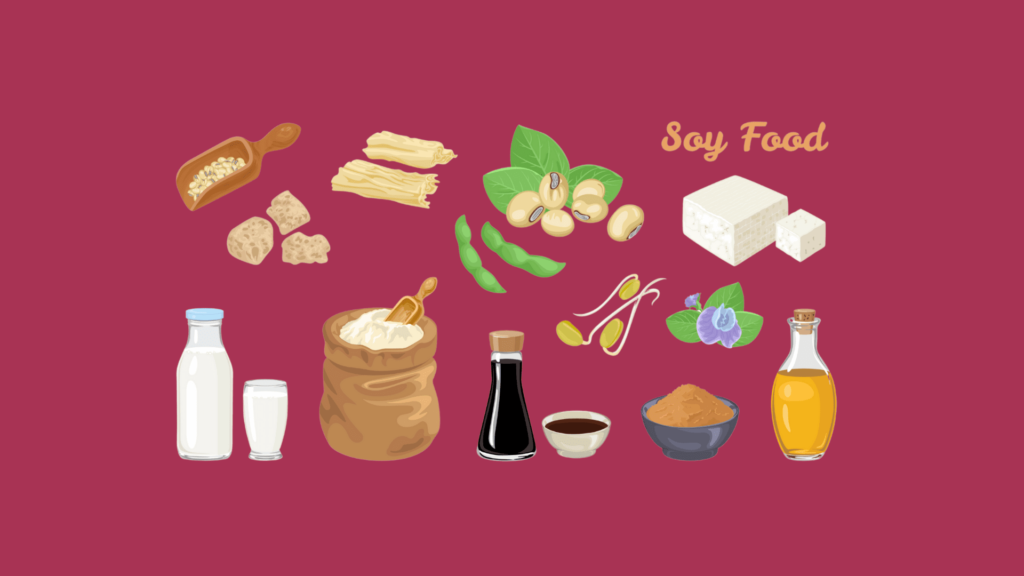 Is there really a connection between soy and infertility?

The answer to that question depends on who you ask… Seriously, every nutritionist and fertility expert seems to have a different opinion about soy.

It’s easy to get confused.

Seems like the easiest thing to do would be to just avoid soy foods altogether, right?

Soy and Your Hormones

Let’s start by taking a look at why soy is so controversial for your fertility in the first place.

It all comes down to the potential impact soy may have on your endocrine system, more specifically your sex hormones.

Soy products contain molecules referred to as isoflavones. The two predominant isoflavones are genistein and daidzein. Due to their chemical similarity to estrogen – more specifically estradiol (E2) – they are often called “phytoestrogens”. These phytoestrogens can bind to estrogen receptors throughout our bodies.

The ability of soy to mimic estrogen and bind to estrogen receptors is what has led many to recommend the avoidance of soy when trying to conceive.

However, it’s important to note that soy isoflavones are much weaker than our endogenous estrogens… about a thousand times weaker, in fact. Additionally, isoflavones do not accumulate in our bodies and are metabolized quite quickly.

Time to look at the research surrounding soy and reproductive health.

As we just mentioned, the estrogen-like effects of isoflavones underlie many of the concerns around soy and fertility.

In fact, back in 1994, a newsletter produced by the former Perinatal Nutrition Practice Group of the American Dietetic Association included an article that suggested women trying to conceive should avoid consuming excessive amounts of soy.

Some of the initial concerns surrounding soy consumption and infertility emerged from research suggesting that soy may negatively impact menstrual cycle length (MCL). In particular, one group of researchers found that daily consumption of soy protein (containing 45 mg isoflavones) increased MCL by 1.5 days; an increase attributable to the lengthening of the follicular phase from 15.0 to 17.5 days. In addition, the midcycle surge of luteinizing hormone (LH) and follicle-stimulating hormone (FSH), was markedly suppressed in response to soy.  However, these findings are limited by the fact that only 6 pre-menopausal women were included in this study.

The relative delay in ovulation along with the suppressed midcycle surges of LH and FSH have, in part, formed the basis of speculation that perhaps – in some women – soy may decrease the chance of getting pregnant.

A systematic review was published several years later looking at the effects of soy isoflavone exposure on menstrual cycle length and reproductive hormones. The review still found an increase in MCL by 1.05 days in premenopausal women with increased soy or isoflavone consumption, but it was considered insignificant compared to the initial findings published.

Interestingly, when looking only at studies with a low risk of bias, no effect was noted on LH and FSH. Moreover, soy consumption did not affect circulating estrogen levels (E2) or sex hormone-binding globulin (SHBG) in premenopausal women.

Other studies have suggested a possible effect on ovarian aging, but there is no data to date that has demonstrated increased consumption of soy products and younger age of menopause.

Instead of looking at how soy consumption may indirectly impact fertility, some researchers have looked at how soy may affect the probability of conception and live birth.

One of the first research papers to look directly at soy and fertility outcomes was from the Adventist Health Study-2. Using food frequency questionnaires, researchers found that women with high isoflavone intake (≥ 40 mg/day) had a 3% lower lifetime probability of giving birth to a live child compared to women with a low intake (< 10mg/day).

Clearly, there may be some instances when soy isoflavone intake may be beneficial for reproductive health and fertility outcomes. With that said, we’re not saying that everyone should supplement with soy. However, the data above would suggest that dietary intake of soy appears to have little to no adverse effects on female fertility… and may in fact be a preferred source of protein when it comes to fertility treatment outcomes.

From an integrative medicine standpoint, there are a few additional considerations to keep in mind when deciding whether to include soy in your diet.

First, dietary soy intake can act as a food allergen in some individuals. And while it’s not commonly talked about, an inflamed and irritated gastrointestinal tract can negatively impact reproductive health. Poor gut health can disrupt the absorption of key nutrients needed to conceive and give birth to a healthy baby. Moreover, food allergens can disrupt the balance of your gut microbes, which help regulate hormone metabolism. Finally, food allergens can be a source of chronic inflammation, a contributor to conditions linked to infertility like endometriosis and PCOS.

Aside from being a potential food allergen, soy has been shown to negatively impact thyroid function. For those of you struggling with hypothyroidism, you know this can be an important contributor to infertility as well. Normal thyroid levels are also important for a healthy pregnancy and proper fetal development.

Hopefully, you’re beginning to see that soy has other potential health effects to consider when trying to conceive. Hence, it’s always important to take an individualized approach when determining whether to include soy in your diet.

Learn How Other Women Trying to Conceive Are Nourishing Their Bodies
and Increasing Their Chances of Getting Pregnant TODAY.

Join Us Inside Our FREE Training!

Like most foods, it’s best to consume soy in moderation if you choose to incorporate it into your diet. It’s also important to pay close attention to the QUALITY of the soy protein you eat.

What’s so good about fermented soy?

What about soy milk?

Soy milk can be tricky. Many types of soy milk on the market are processed and not made with real soybeans. We recommend avoiding soy milk made from soy protein isolate. Also, be sure to check the label for hidden or added sugars.

A word of caution about GMOs…

GMOs are genetically modified organisms, and their safety for human consumption is a hot topic of debate. The biggest concern, however, is not their modification per se, but the reason for modification – to resist pesticides. A significant amount of glyphosate has been found on GMO soybeans, along with a glyphosate breakdown product called AMPA. And as you recall, pesticide residues aren’t helping your efforts to conceive. 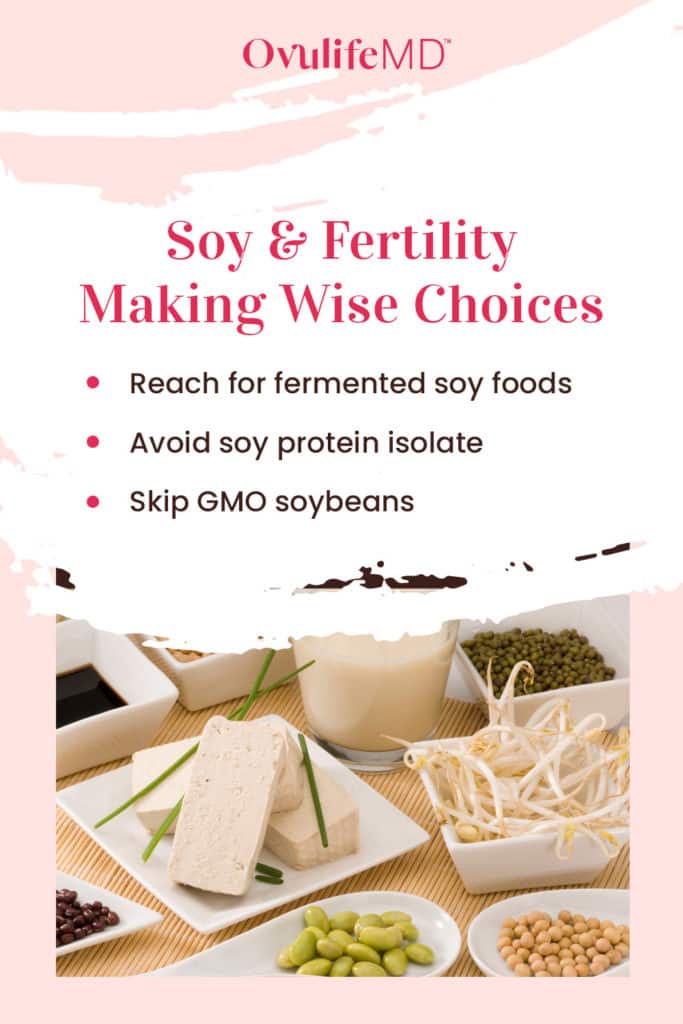 Despite all the hyped-up controversy, some patterns begin to emerge when taking a closer look at the scientific literature surrounding soy and fertility.

For most women trying to conceive, data would suggest that a few servings of high-quality soy (8 oz serving of non-GMO, fermented soy) per week appears to have no adverse effects on female fertility or reproductive outcomes. In fact, it may actually be beneficial if you’re undergoing IUI/IVF or if you have high BPA exposure.

Remember that some unique health circumstances (poor gut health OR hypothyroidism) may mean that it’s best to skip out on soy products altogether. However, it may come down to quantity as well as the quality of soy products chosen in the first place.

If you liked this post, be on the lookout for other controversial food topics as they relate to your fertility (e.g., dairy and gluten).

Whenever you’re ready… discover how to reboot your diet for optimal reproductive health without the calorie counting or juice fasting.