Decoding the Fertility Diet, Part 5:
Mind Your Beverages…
Weighing Your Non-Water Options When Trying to Conceive

“What about the occasional glass of wine?” 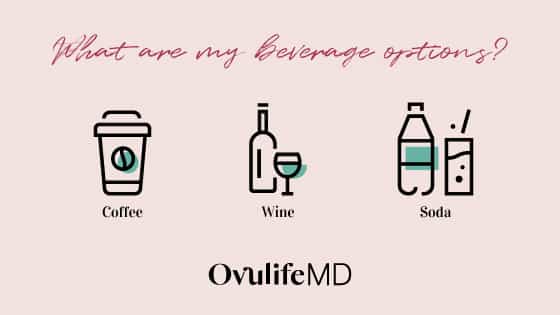 If these questions have crossed your mind, you’re in good company.

The mere thought of skipping morning coffee is anxiety-provoking for many (Dr. Eskew wouldn’t make it to work without it). And that occasional glass of wine… girl, we feel you. But we know you’re willing to do whatever it takes to get pregnant and give birth to a healthy baby.

In our final post of this series, we’re going to review the facts around the beverages we get asked about most when trying to conceive.

Here’s a quick overview of what you’ll discover in this post:

Why you must skip the soda…

There is no way around it, soda is in no way shape or form good for you in any area of health, including reproductive outcomes. The number 2 ingredient in most regular sugar-sweetened sodas (second to carbonated water) is high fructose corn syrup. This food-like substance wreaks havoc on your body by overworking the glucose/insulin loop resulting in inflammation and hormonal imbalance.

Consumption of as little as one sugar-sweetened soda per day has been associated with a 25% reduced fecundability (probability of getting pregnant in a single menstrual cycle) for females, and a 33% reduction for males regardless of the caffeine content. Intake of as little as 1 serving per day has also been associated with poorer IVF outcomes including a 12% reduction in cycles resulting in a live birth.

If you’ve been thinking about kicking the habit, now is as good a time as any! If you love the bubbles, try club soda with lime or lemon. If you’re not ready to completely say goodbye to soda, try swapping to diet and gradually cut back.

Diet sodas still have their own issues (a topic for another day…) but haven’t had the same negative associations as regular soda in terms of reproductive outcomes.

Does milk really do your fertility good?

Based on our current understanding, the answer to this question is fairly clear – it depends on the type of dairy you choose.

Contrary to standard nutrition advice, full-fat milk (along with other forms of dairy for that matter) is the way to go when you’re trying to conceive. This has a lot to do with what happens during the production of low-fat dairy products. For reasons that we’ll save for another post, low-fat dairy contains a relatively larger amount of male-type hormones that can disrupt ovulation compared to full-fat dairy.

So what does all this talk about fat in dairy really mean for you?

For our female readers undergoing IVF, the best study evaluating the impact of dairy on reproductive outcomes comes from the Pro-Fertility diet.

Increased dairy consumption as part of a pro-fertility diet did not appear to negatively impact outcomes. Keep in mind that this study did not differentiate between low-fat and full-fat dairy, and the diet involved a number of other fertility enhancing nutritional components (many of which we have covered over the course of Decoding the Fertility Diet series).

If you’re already a milk drinker (yes, that includes the creamer in your coffee), switch to the full-fat dairy version. If you don’t like milk or dairy doesn’t agree with your digestive system, then feel free to skip it.

Making sense of the caffeine conundrum.

Coffee, on the other hand, is a way of life… and the thought of having to give it up poses a serious conundrum. For many of you, it’s the caffeine in coffee that’s a must. And for others, the flavor is equally important.

Let’s see what the scientific literature shows us about caffeine intake as well as coffee for that matter.

Regular coffee (you know…the pure stuff without sugar, whipped cream, and caramel) does not appear to affect fertility when drinking 2-3 cups per day. This was found to be true for ovulatory infertility as well as infertility due to other causes such as endometriosis or tubal problems.

In terms of outcomes in women undergoing fertility treatment, the data related to caffeine is limited and conflicting at best. However, a recent review evaluating data from 5 studies pulled together (known as a meta-analysis) failed to find a negative association between coffee or caffeine consumption and the ability to conceive.

Although it’s not related to your efforts to conceive, it is important to point out that there is evidence to suggest that consuming 300mg of caffeine per day has been associated with an 37% increased risk for spontaneous abortion.

So until there is stronger evidence for women trying to conceive, we recommend sticking to the American College of Obstetricians and Gynecologists (ACOG) recommendations that suggest women who are pregnant or capable of becoming pregnant limit caffeine intake to less than 200 mg/day.

For reference, a grande dark roast coffee from Starbucks contains 260 mg of caffeine, and a tall comes in right around 193 mg. Add in some vanilla flavoring and you’re looking at closer to 25 grams of sugar – yikes!

So it’s important to note that in regards to the data on caffeine we’re talking about consuming plain ‘ole coffee here. When you start adding in all that sugar, syrup, skim or low-fat milk, then you can definitely start to wreak havoc on your body as noted in the first two sections of this post.

If you’re looking for ways to cut back on caffeine in your coffee, then consider weaning down to half-caff – just mix in decaf beans with the other half of your regular beans.

You can also try skipping any additional caffeinated beverages after your morning pick me up. If you’re feeling low on energy at any point in time, make sure to drink some extra water or do a quick stretch to get the blood flowing!

The muddled picture of alcohol

Most women are well aware that no amount of alcohol is considered safe to consume while pregnant, or while trying to get pregnant for that matter.

But what about drinking before your efforts to conceive… will it negatively impact your chances of getting pregnant?

When reviewing the evidence, it’s somewhat unclear if alcohol reduces your ability to conceive prior to commencing your reproductive efforts. With that said, it likely comes down to when and how much you drink.

In women undergoing fertility treatment, one study has shown that alcohol intake throughout the year prior to treatment was not associated with any adverse reproductive outcomes, including live birth.

In contrast, another study noted negative effects of moderate alcohol consumption closer to IVF treatment. More specifically, women who drank ≥ 4 drinks per week during the week and/or month prior to IVF treatment had a 16% lower odds of live birth compared to those who drank less. And when both partners drank at least four drinks per week, researchers noted a 21% lower odds of live birth. So the men better listen up as well!

To further muddle the picture about alcohol, research looking at women without a history of infertility found that alcohol intake prior to getting pregnant (or attempting to become pregnant) did not impair ovulation to the point of decreasing fertility. It’s important to note, however, that this study only looked at ovulatory infertility and not other factors of infertility.

Keep in line with the recommendations of the CDC. In other words, women ACTIVELY trying to conceive should abstain from alcohol. This is also true for those undergoing fertility treatments as well.

And yes, although the occasional alcoholic beverage outside of treatment time may not be detrimental, those who prefer to err on the side of caution should eliminate alcohol altogether…this is certainly our recommendation despite the mixed findings in the scientific literature.

But what if you just experienced an unsuccessful cycle? Or you lost a pregnancy?

Then by all means, do what feels right to you. Consider a glass of red wine instead of a sugar-laden cocktail or beer. Either way, don’t guilt yourself.

And if you’re at a social function and you don’t want to feel awkward with an empty hand (yeah, we’ve been there too), then opt for a club soda with lime or ask the bartender discretely to make it a mocktail (been there, done that) and no one will be any wiser.

Sometimes it’s nice to have something other than just plain old water.

We totally get it. Besides, there’s a lot more to what we drink other than just taste.

So, regardless of your favorite beverage, remember some of the facts you just learned if you’re trying to optimize your chances of conceiving.

There you have it… our final post in the Decoding the Fertility Diet mini-series. 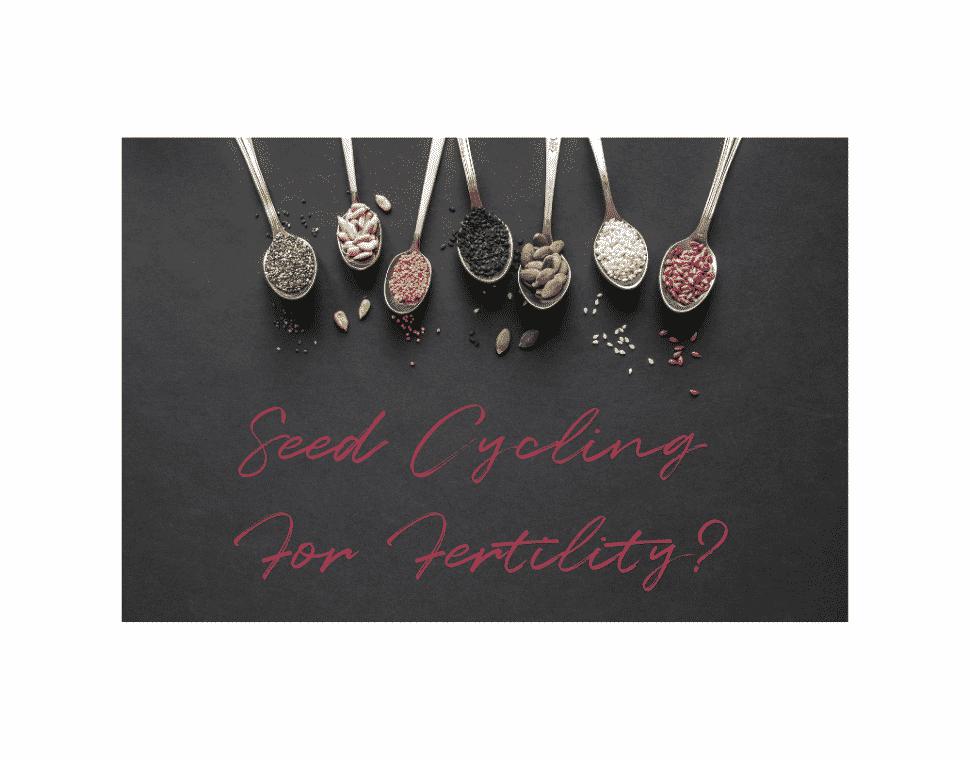 Seed Cycling for Fertility…
Does It Really Work? 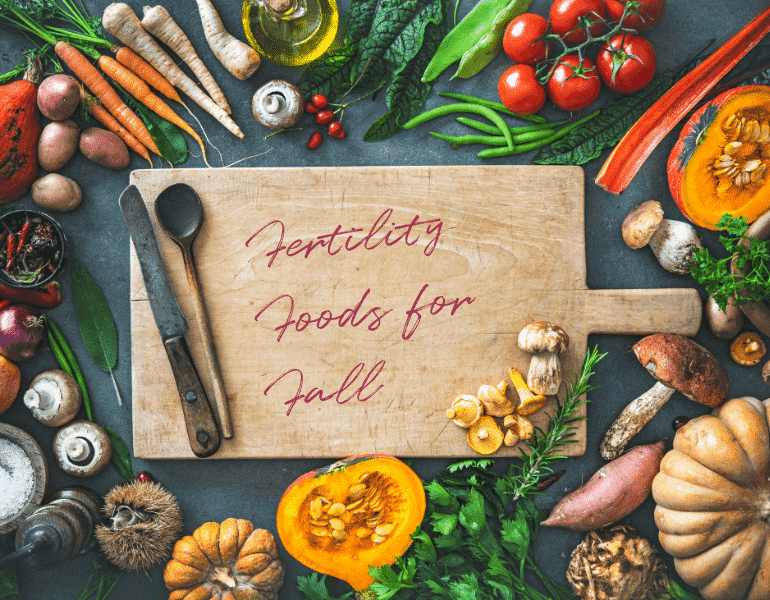 The Best Fertility Foods
for the Fall Season